Maria Menounos and Me 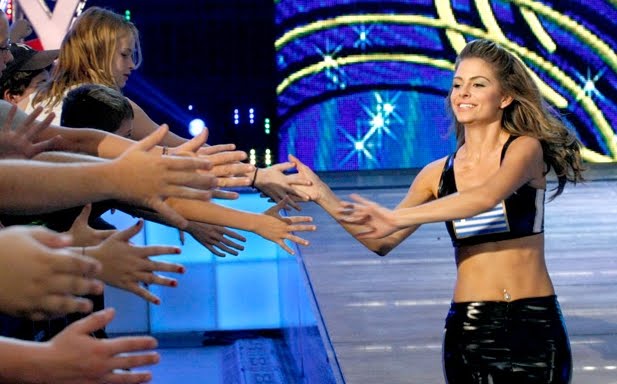 Every now and then, the fact that I can string a few words together pays off in fun ways.

I had a Twitter interaction with WWE Monday Night RAW guest host Maria Menounos today.  It all started when I noticed that she was ReTweeting articles about her RAW appearance, including the Boston.com article about her.

I really enjoyed Maria Menounos and Nancy O'Dell hosting RAW.  They did a great job. And God knows I wouldn't miss a chance to suck up to a hot female celebrity, so I slapped together a WWE Universe blog.  What the hell?  Maybe she'd read it.

JohnOrq @youromegagirl  A WWE Universe blog I wrote in praise of your RAW appearance. Hope you enjoy! [Note: I've since disabled my WWE Universe account. Read the blog below.]

She did read it.  Within an hour, this appeared on my News Feed:

Then this appeared as a Direct Message to me:

youromegagirl Thank you sooo much for your kind words! I truly appreciate it and really....raw was the most electrifying night of my life!

That's pretty cool.  I made Maria Menounos happy.  I responded:

JohnOrq @youromegagirl Awesome. I'm so glad you liked it. Can't wait for Serial Buddies (and your WWE return...)

I figured that was the end of it and was more than satisfied.  Next thing I know, another Direct Message:

youromegagirl Thnx! U gotta tell ur peeps to follow me on twitter so I can stay in tune w/wrestling fans!

Talk to wrestling fans?  Maria, why would you want that?  I kid.  Sort of.  Anyway, do what Maria asks, WWE fans, and follow her on Twitter. She's super cool.  (Maria changed her Twitter to @mariamenounos)

Reprinted below is the blog in question that started it all:


In the weekly procession of RAW guest hosts, there have been winners (Shaq, Ben Rothlisberger), losers (ZZ Top, Jeremy Piven) and welcome comebacks (Trish Stratus).  Access Hollywood hosts Nancy O'Dell and Maria Menounos join the winners category with a bullet.  And while O'Dell got to "run RAW" and was given the storyline role of initiating the blockbuster Diva Trade that rearranged the women's division on all three brands, it was "special correspondent" Maria Menounos who truly stood out and made memories.
A lifelong WWE fan, Maria was clearly excited to be at RAW.  That was evident from every minute she was on screen.  What's more, she appeared to be knowledgeable about the WWE product, which is the most important aspect to loyal WWE fans for a celebrity outsider entering "their world" to be.  Menounos made no faux pas like Piven did when he called Summerslam "Summerfest."
Maria fulfilled what she called a lifelong dream to enter a WWE ring and compete in a six Diva tag alongside Kelly Kelly and Gail Kim against Beth Phoenix, Alicia Fox, and Rosa Mendes.  Though limited as to what she could do because she pulled her hamstring while training, Maria still impressed by tossing Fox around and slapping Beth Phoenix (before making an opportune tag and getting out of there lest get torn apart by the angry Glamazon.) No one would confuse Menounos with fellow Greek goddess and WWE megastar Trish Stratus in the ring, but for a celebrity guest she performed admirably in the squared circle.
There was a YouTube video that briefly made the rounds a few days ago showing that Menounos took her WWE appearance very seriously: training in an AWF ring and executing some eye-opening maneuvers for someone who is not an actual wrestler. The video showed that Maria listened carefully, trying to absorb as much as she could about what it takes to be a pro wrestler.
It's a shame the Divas match was so short and Maria couldn't show off that cool looking handspring elbow (Kelly got to do the honors).  Still, for a non-wrestler, Maria did a great job and looked like she belonged.  And why not?  She's a real fan.  She gets it.  And standing next to the other Divas, she was clearly as hot as any of them.
As fun as her wrestling debut was to watch, Maria really rocked as a backstage interviewer.  No surprise she'd be more than comfortable with a microphone in her hand as she has interviewed all of Hollywood's top celebrities.  But Maria was really phenomenal interviewing Legacy and dropping the bombshell that they wouldn't be wrestling together at Bragging Rights and would be facing John Cena in a Triple Threat match.
The standard forevermore in being a great backstage interviewer is Mean Gene Okerlund.  No one could ask a question, instigate and feign offense at a heel like Mean Gene.  Maria must have dug up some buried memories of Mean Gene from when she watched WWF as a kid because she was right on point talking to Legacy.  Better than many of the backstage interviewers actually on the WWE payroll.  My reaction when she strutted away smugly to close the promo was, "Wow, that was phenomenal!"
As far as I'm concerned, Maria Menounos is welcome back in WWE any time.  And when she's back, she hopefully won't need to show Triple H how to do a headscissors for 15 minutes again.
Posted by Back of the Head at 10:28 PM