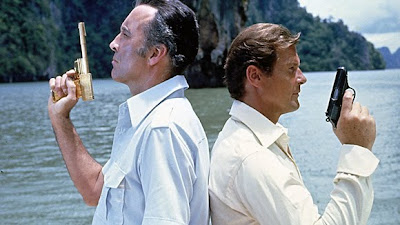 Christopher Lee is Scaramanga, The Man With The Golden Gun, the world's greatest hitman out to kill James Bond, the world's greatest secret agent.  Roger Moore's second outing as 007 has its ups and downs. The Man With The Golden Gun takes Bond to some splendid exotic locales: from Beirut to Macao to Hong Kong to Bangkok to Scaramanga's private Vietnamese island. There, Scaramanga not only has a luxurious four star resort he couldn't wait to show off to Bond, plus a solar laser weapon (!), but he has also spent his millions to build a totally ridiculous funhouse of doom that would be more typical of a local traveling carnival, run by Herve Villechaize pre-Fantasy Island. In the chase for Scaramanga, the eyeroll-inducing bullshit Bond ends up doing includes fighting off an entire school of kung fu fighters, barrel rolling a car in mid-air, and worst of all, running into the redneck sheriff from Live and Let Die in probably the worst recurring character cameo in franchise history.  Moore's Bond is at his misogynistic best, whether spying on Maud Adams showering and then slapping her around in her hotel room or barking at Britt Ekland, who plays his airhead secretary Mary Goodnight. In Ekland's case, Bond can hardly be blamed for being cross at her for her terrible acting.


Added to John and Bond