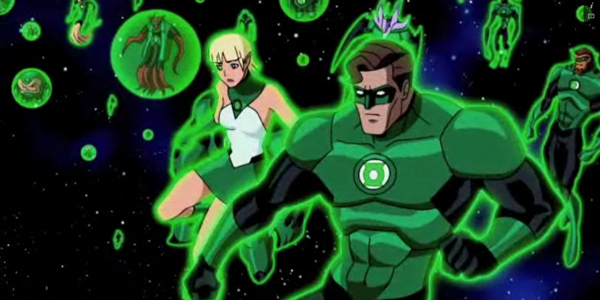 ** SPOILERS **
Green Lantern: Emerald Knights deepens the mythology of the Green Lanterns in the DC Animated Universe via a bunch of Green Lanterns deciding a galactic crisis that could mean the end of existence as we know it is the perfect time to tell the newest recruit, Arisia, a bunch of stories about past exploits of Green Lanterns. Arisia learns she wields the most powerful weapon in the universe on her finger but it's never easy being green.

There's plenty of continuity to keep DC Universe nerds happy. The main villain is Krona, the mad Guardian of the Universe, and his Anti-Matter Universe shadow demons. To help illustrate how Krona is the opposite of the Guardians who give the Lanterns their marching orders, when he turned evil, Krona grew to become as big as a planet as opposed to as little as a Muppet.

The tales are generally well done: We learn ("according to Scripture") of the origin of the Rings of Power and the first Green Lantern who realized he could shape the emerald light into constructs. (Wait, the Guardians who built the rings didn't know the rings can do that? Or did they withhold that vital info from their first Lanterns? Either they're not very smart or they're dicks.) Kilowog informs us how he became the Green Lantern drill sergeant - more importantly, we learn the secret origin of the word "poozer". A female Green Lantern returns to her home world to confront her daddy issues, which has some pretty well-conceived combat between father and daughter. (It also showcases the most hilarious-looking Green Lantern ever, basically a giant head with wee little arms and legs who gets beaten to death by the Khunds).

More recent Green Lantern villain Atrocitus gets to be in the movie for a story about Abin Sur and Sinestro's friendship. Atrocitus even previews what's likely to be the next Green Lantern DVD by telling Abin Sur Sinestro will turn evil and form the Sinestro Corps. (No way! You can't trust a guy named Sinestro?) The most fun story is an adaptation of the classic tale penned by Alan Moore about the alien killer who encountered the Green Lantern planet Mogo. Finally, it all comes together when Krona attacks the universe. Even Mogo joins the fight as the Green Lantern Corps uses the planet OA itself as a weapon against Krona.

As in the previous Green Lantern: First Flight, once again, imagination seems to be in short supply: the challenge of Green Lantern is in depicting what the Power Rings can do, which is anything. And once again, Green Lanterns, no matter what shape or race, only seem to be capable of imagining basic shapes, swords, axes, and blasting lasers from their rings. Let those who worship evil's might, beware their power, Green Lantern's swords and axes! But no giant green boxing gloves.
Posted by Back of the Head at 7:30 AM