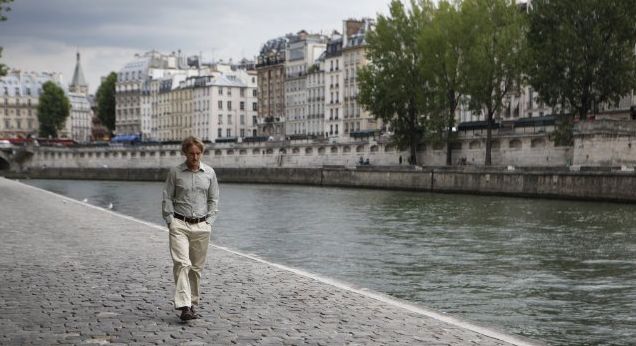 ** SPOILERS **
A dollop of froth from Woody Allen, Midnight in Paris is a love letter not just to the City of Lights, but to the idea of Paris, of whatever era or time Paris best epitom﻿izes for you. For successful hack screenwriter-turned-struggling novelist Owen Wilson, his perfect vision of Paris ("in the rain", of course) is during the 1920s, when literary giants like Ernest Hemingway and F. Scott Fitzgerald made Paris their home. Wilson, basically playing a wide-eyed, okeydoke spin on Woody Allen himself, is engaged to pampered, dismissive heiress Rachel McAdams. (McAdams is rather voluptuous, as if Allen somehow got her to switch bodies with his absent muse Scarlett Johansson.) Rather than endure dinners with her wealthy, right-wing parents or listen to McAdam's "just a friend" Michael Sheen blather on pretentiously while sightseeing, Wilson drunkenly walks the streets of Paris at night and encounters a magical car, like a Parisian version of the DeLorean from Back to the Future, that transports him to the 1920s Paris of his dreams. Wilson is agog to be able to hang out with his idols Hemingway, Scott and Zelda Fitzgerald, Cole Porter, Gloria Steinhem, and Salvadore Dali. Dali is played by Adrien Brody and his scenes with Wilson are an amusing nose-off between the two. Wilson also meets his dream woman Marion Cotillard, who has her own ideal vision of Paris, La Belle Epoche, which they visit together. The temptation to stay in your "perfect era "of Paris, and whether nostalgia is just the inability to cope with the messiness of real life, is the bluntly stated theme of Midnight in Paris. What happens if you stay in your dream era and that becomes your reality? Won't you then need a new ideal? The presence of First Lady of France Carla Bruni and Lea Seydoux as a comely street vendor help Wilson see that present-day Paris in the rain is as magical as it would be in any era.
Posted by Back of the Head at 11:31 AM