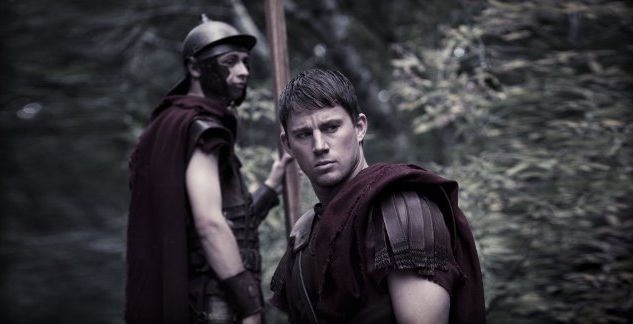 
In The Eagle, Channing Tatum delivers a fantastic performance in his starring role as Sam The Eagle. Wait, what? The Eagle isn't about the Muppets? It's about Ancient Britain under control by Romans and a Roman commander who goes past Hadrian's Wall to find the missing standard lost by his father in 120 A.D.? All right. If you say so.

In The Eagle, Channing Tatum plays Marcus Aquila, a rising star of the Roman legions who chose Britain as his outpost. Tatum is indeed in merry olde Britain to find the gold standard, the eagle, lost when his father lead his legion past Hadrian's Wall into "the end of the world", populated by the dangerous blue-painted natives, the Picts. The Picts, ancestors of William Wallace, are like the N'avi of Ancient Britain. Before Tatum can do what he really wants to do, he first whips his legion into shape, and just in time as a savage attack by the Picts leaves him injured. His heroism gets him an honorable discharge and a lot of time to mope around at the villa of his uncle Donald Sutherland.

When Tatum spares the life of a native, Jamie Bell, in a gladiator pit, Bell becomes his slave and agrees to lead him past Hadrian's Wall to find the eagle and what became of his father's men. Tatum and Bell don't start off with a Roman bromance; as soon as the're through the Wall, Bell, who makes it clear via his hard stares and tight-lipped sneers he hates Tatum and all Romans, turns the tables on Tatum and has him chained up as a slave by the Picts. Beyond Hadrian's Wall, turnabout is fair play. They encounter a survivor of the original expedition, Mark Strong, who has forsaken his Roman name and lives among the natives. But mainly, Bell stands by and shrugs while Tatum gets dragged around by a horse and kicked around by the Picts.

However, it was all a ruse by Bell to keep Tatum alive while they find the eagle, which they do, followed by a final showdown with the Picts where they fight side by side with Strong and the survivors from Tatum's father's legion. In gratitude, Tatum frees Bell from indentured servitude and the movie curiously leaves the door open for further adventures between the two.

Tatum has made a career out of playing heroic square-jawed jarheads, including Duke in G.I. Joe: The Rise of Cobra, and he cuts a dashing figure as a Roman commander. Bell plays an angry young slave with conviction and gritted teeth. The Eagle strives for time period authenticity and succeeds in depicting the grime and hostility of life in 2nd century, Roman-occupied Britain, but then dialogue like "I should have been consulted!" "Well... you weren't." sabotages the verisimilitude.
Posted by Back of the Head at 12:23 PM