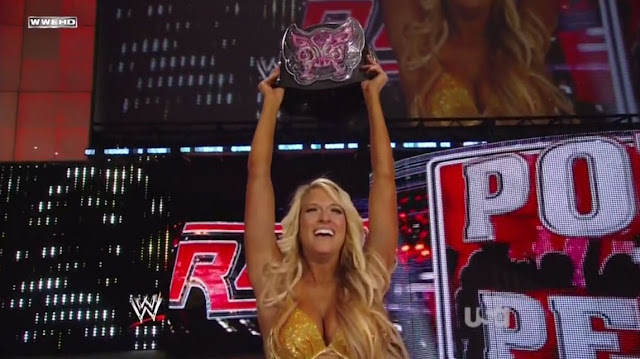 All Monday afternoon, building up to the "Power to the People" fans' choice episode of WWE Monday Night RAW, my timeline was bombarded with retweets from Kelly Kelly's Twitter (@RealKellyKelly) about voting for her. K2 was the only potential contender WWE Divas Champion Brie Bella and her twin sister Nikki Bella addressed (and dismissed) on their Twitter (@thebellatwins). A quick scan of their Facebook pages shows a lot of hype to vote for Kelly during RAW; no such hype for Eve or Beth Phoenix on their pages. This was the equivalent of a very well orchestrated high school voting campaign. And it worked!

I was not ready for the Reign of Bellas to end so soon, but if anyone deserved that pink butterfly, it's Kelly Kelly. Wrestling is, among many things, a popularity contest and Kelly Kelly is the most popular WWE Diva. She's been around five years, had major angles start and then get dropped (a couple of huge ones this year alone, specifically Kharma). She's been a reliable trooper, never had a scandal, never embarrassed the company, has been a loyal company-made star from day one. And the people love her. Hell, I love her.

Kelly Kelly is the Divas' version of Ricky Steamboat (not quite equal to The Dragon in technical skill). Since day one, K2 has been the epitome of a babyface. Kelly Kelly deserved the attagirl.

Kelly Kelly is also the first Diva to successfully defend the World Heavyweight Championship and then become Divas Champion.