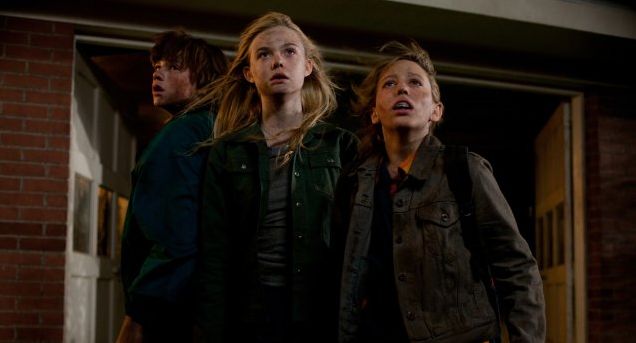 "Mint."
﻿What fun it is to make a movie! The most exhilirating moments of JJ Abrams' Super 8 involve the film's main characters, a group of middle school-age friends, banding together in the summer of 1979 to shoot a zombie movie in their Ohio small town. Invoking what must be vivid memories from his own youth, Super 8 projects a childhood filled with wonder, tragedy, adventure, young love, and discovery most of us didn't have but those of us who were weened on Steven Spielberg films feel like we had in our collective imaginations.

I love Steven Spielberg's movies more than the next guy, unless that next guy is JJ Abrams. Super 8 is a loving homage to all things classic-Spielbergian. Familiar elements and even whole action sequences from Jaws, Close Encounters of the Third Kind, E.T: The Extra-Terrestrial, Jurassic Park, and The Goonies are cheerfully and meticulously woven by Abrams into his film. The trouble with Super 8 comes when its confident, nostalgic Steven Spielberg-ness yields to disruptive, uncertain JJ Abrams-ness.
When the young filmmakers, including The Girl They Like, shoot late at night in a train depot outside of their town, their worlds are suddenly upended by a violent train explosion that releases... something... into their midst. The train disaster is Explosion Porn. It might well be the most horrific, graphic, action sequence in a movie this year. The sequence is relentless, goes on for what feels like forever, and Abrams presents the fiery devastation with almost maniacal intensity. (That the five children survive such a catatastrophe completely unharmed is the first of many conceits we are asked to accept.)
Soon, strange happenings pile up in their little corner of (white) Americana. (There is one black person in the whole movie. He is a scientist but guess what? He dies - but not before he pulls a gun on a bunch of white kids.) Townspeople go missing, dogs scatter out of town in all directions, power outages become increasingly commonplace, and electronic devices mysteriously vanish. The investigation by the local deputy, Kyle Chandler from Friday Night Lights, is stonewalled by the US Air Force, which has all but commandeered the town and soon evacuates it and turns it into a war zone.
What is the Super 8 Secret?  It's an alien, and like E.T., it wants to go home. But unlike the cuddly E.T., the alien is a big, gruesome, multi-limbed CGI creature that looks like re-purposed concept art from Abrams' previous hits Cloverfield and Star Trek. The alien, its reveal, and the circumstances surrounding its existence let all the air out of the Super 8 balloon. The alien creates more questions than Super 8 is willing to answer: Why did it kidnap townspeople? Why did it smash up parts of the town when it wanted to stay hidden so it could rebuild its spaceship? What did the Air Force learn from it after holding it in captivity for 20 years? Why am I not actually interested in any of the answers?
Super 8 is "mint" when the young filmmakers - chubby writer/director/tyrant-in-training Charles (Riley Griffith), pyrotechnics enthusiast Cary (Ryan Lee), future Method actor Martin (Gabriel Basso), and our charismatic hero, model-builder/makeup artist Joe Lamb (Joel Courtney) - are simply immersed trying to make their zombie movie, having loud, passionate arguements about "character motivations" and "production values". The budding relationship between Joe Lamb and the troubled Alice, played etherially by Elle Fanning, is handled gently and sweetly. The young cast is honest and excellent. An almost-unrecognizable David Gallagher from 7th Heaven provides welcome comic relief as the stoner dude who works at the local camera store ("No one develops film overnight, asshole.") and has the hots for Charles' sister AJ Michalka.
At its best moments, Super 8 is a wonderful film about youth, love of movies, friendship, and hard-earned understanding between father and son and father and daughter. Except it has a rotten CGI alien monster in it. Stay through the closing credits to watch the terrific, utterly hilarious super 8 zombie movie the kids made. It's worlds better than Super 8's bewildering third act.
Posted by Back of the Head at 10:58 AM