Transformers: Dark of the Moon 3D

TRANSFORMERS: DARK OF THE MOON 3D 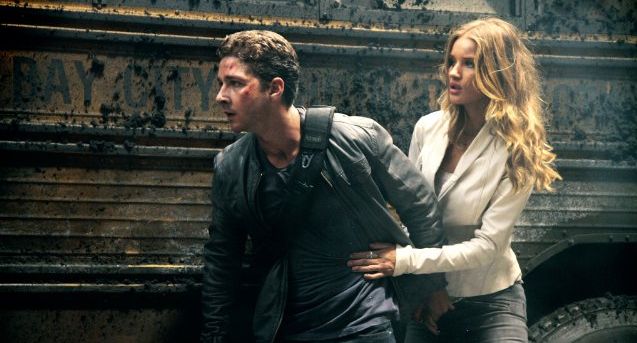 ** SPOILERS **
3D Autobots Wage Their Battle to Destroy the Evil Forces of 3D Decepticons
Transformers: Dark of the Moon opens with a joke, a rather entertaining knee-slapper the movie tells with a somber straight face: that America's space race of the 1960s which culminated with the Apollo 11 mission was a response to an Autobot ship crashing on the dark side of the moon (spare us your Pink Floyd jokes) in 1961. Neil Armstrong's "one small step for man..." was a giant leap into the mangled remains of the spacecraft ("the Ark", which was the name of the Autobot ship that brought the Transformers to Earth in the 1984 cartoon). Director Michael Bay has fun channeling Oliver Stone, matching JFK's first ten minutes nearly shot-for-shot, mixing archive footage of John F. Kennedy, Walter Cronkite, and Richard Nixon with stand-in actors, sometimes in the same frame. This revisionist history lesson turns out to be a gas, but it doesn't take long at all for Dark of the Moon to slam-bang right into its patented brand of Bayhem.