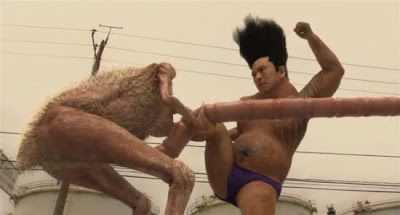 Weird Japanese mockumentary about a man who, when charged with electricity, transforms into Big Man Japan, the Ultraman-like protector of the Japanese islands.  When he isn't a fifty foot tall naked, tattooed, fat guy who carries a big stick and battles even stranger monsters, Big Man Japan is a lonely divorced father who squeaks by an ignoble existence while angry citizens mock him and throw rocks through his windows. The sixth generation of Big Man Japan, Masaru Daisatô, as he is known in real life, is a sad sack.  His ex-wife keeps his beloved daughter away from him so she can't carry on the tradition of turning into a huge naked monster-fighter.  His father electrocuted himself and his grandfather suffers from dementia and sometimes transforms into Big Man Japan and destroys parts of Tokyo.  The CGI spends a lot of time in the uncanny valley.  Big Man Japan is supposed to be a comedy, I think, but maybe the language barrier took away what was supposed to be funny.  Ultraman and the Power Rangers never had it so rough.
Posted by Back of the Head at 7:25 PM