I LOVE YOU, MAN 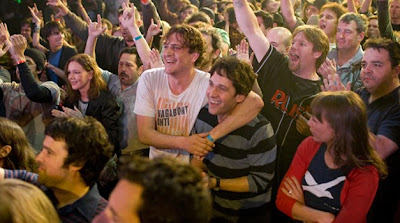 Affable and very funny bromantic comedy that walks some fine lines without teetering over. The clever central conceit is that Paul Rudd and Jason Segel are both straight. Period. Once their core heterosexuality is established as iron clad, they are free to carry on in as gay a manner as they want in their friendship and we buy everything because there's no chance of an "Ending of Chasing Amy Situation" happening. Segel convincingly plays the polar opposite of his lovesick mope in Forgetting Sarah Marshall. Rashida Jones plays Rudd's fiance as the sunniest, most understanding and forgiving woman ever. Such a creature couldn't possibly exist. Her one flaw is that she doesn't like to give blowjobs, but wait, no, she does! The supporting cast, including Andy Samberg, JK Simmons, Jaime Pressly, and Lou Ferrigno are so good, it's a shame they're not given more to do. I Love You, Man doesn't have an ounce of malice. There is no artificial villain. The closest the movie provides to a heavy is Jon Favreau as Pressly's asshole husband, but it's understandable why he's got a chip on his shoulder after he endures a gallon of puke on his face. The only real chink in I Love You, Man's armor is that the movie has a lot of funny stuff to say about modern day bromance but doesn't necessarily have a story to tell. The third act resorts to some standard movie artifice to create some easily resolved conflict before the big finale. Still, it's impossible to not like a movie that's so gay for the band Rush.
Posted by Back of the Head at 11:17 PM