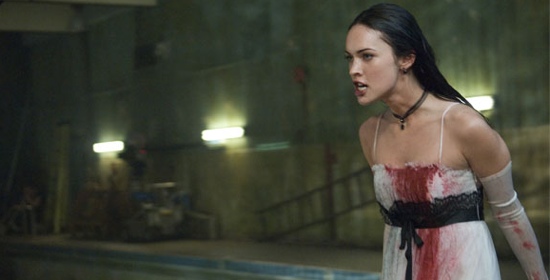 Jennifer's Body, the tragic tale of two BFFs who aren't meant to be besties forever because a demon came between them, didn't slay me as I'd hoped.  It's equal parts snarky teen comedy and blood-splattered horror movie, yet doesn't push far enough in either direction. Trading heavily on the milky promises of Megan Fox's body, Jennifer's Body is a cock tease to the Nth degree.
Though Jennifer's Body is being sold entirely via the willful exploitation of Megan Fox as a sex commodity, the dramatic heavy lifting falls to Amanda Seyfried, who plays Fox's long-suffering best friend with the unfortunate but accurate nickname of "Needy."  Seyfried is the only person in the movie who has a complete character. She plays sweetness, vulnerability, lesbianism (of course - too bad it's merely a toned down Wild Things moment), tragedy, hell-hath-no-fury grrl power vengeance, you name it. I had a hard time caring about her, per se, or anyone else in the movie for that matter, but Seyfried had the most to work with and did the most with it. The bookend scenes and closing credits montage reveal Jennifer's Body to be about empowerment, literally, for the poor girl in Megan Fox's shadow. Yet even the Clark Kent glasses, dowdy outfits, and her stringy hairstyle can't suppress Seyfried's radiance.
Sadly, comparatively little care and attention was paid to the character of Jennifer, who begins the story as an unlikable small town teen harlot and becomes... an unlikable small town undead teen harlot who eats her classmates.  As Jennifer, Fox's only assignment is to embody a cunning, irresistible temptress. She's up to the task at hand, but Fox generates little sympathy, empathy, or any emotion outside of fleeting lust. The only time we feel badly for Fox is when she's tied up in the woods by the Satanic rock band Low Shoulder and they "go Benihana on her ass" to sacrifice her soul for a record deal. This is simply because even after two Transformers movies where she's chased around the world by giant robots, it was the first time on screen Fox was victimized and robbed of her impenetrable veneer of hotness. (She immediately regains it and maintains it for the rest of the movie.) Jennifer is never interesting, with or without the devil inside her.
The laughs in Jennifer's Body are provided by Diablo Cody's pop culture-laden, hit-or-miss candy girl dialogue. Generating chuckles are offbeat choices like dressing the reliable JK Simmons in a wavy wig and giving him a hook for a hand. The biggest LOL moment for me turned out to be during the dueling sex scenes as Fox murders and feasts on Kyle Gallner, the clueless emo kid, while Seyfried and her easygoing boyfriend get busy under the sheets.  (I liked that they both kept their watches on and he bragged that he made love to her "for four minutes.")  As Fox turns Gallner into "lasagne with teeth", Seyfried's boyfriend is oblivious to her squirms and tears as she's visited by visions of Fox's murder victims.  (I found it to be a hilarious reversal of the infamous sex scene from Munich, perhaps the worst sex scene ever filmed.)  When the boyfriend finally notices Seyfriend in distress beneath him, he assumes, "Am I too big?"

For the red-blooded heterosexual male who buys a ticket in order to have mind's eye sex with Megan Fox's face, cleavage, and what limited other body parts she's willing to bare, the surprise is Jennifer's Body isn't quite "Twilight for boys."  Titillation aside, Jennifer's Body is way more for the girls. Cody's script is positively loaded with modern teenage girl issues: jealousy, betrayal, obsession, your BFF stealing your boyfriend, eating disorders (Fox, newly a demon, gorges on rotisserie chicken and vomits up buckets of blood), etc.  Seyfried's character is introduced lovingly gazing at Fox cheerleading. Another girls calls Seyfriend "gay for her" and the movie deals with this head on. And mouth on, and tongue on. (But also with clothes on.) When Fox explains her newfound supernatural powers to Seyfried, she demonstrates her healing ability ("It's like some X-Men shit!") by cutting her wrist.
Somewhere in the third act of Jennifer's Body, Seyfried has a pow wow with her boyfriend that Fox is "evil evil, not just high school evil."  She'd hit up the Occult section of their school library ("Our library has an Occult section?") and studied up on how to defeat the Succubus demon that inhabits Fox's body and forces her to feast on the flesh of boys to stay looking hot.  It was an amusing riff straight out of an early season episode of Buffy The Vampire Slayer, with the movie's Willow and Xander stand-ins strategizing how Buffy might slay the demon of the week.  Except there is no Buffy in Jennifer's Body, or worse, Buffy is the demon. Therein lies the rub.  It's kind of depressing when Buffy is AWOL and Willow has to do everything herself.
Posted by Back of the Head at 2:57 PM