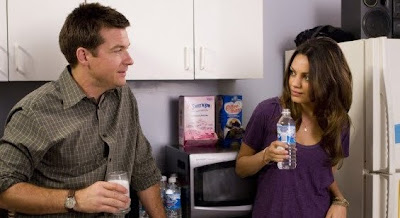 I would have waited to see Extract on DVD or cable were it not for the glowing recommendation from Beavis and Butt-Head. Those two have never steered me wrong about what sucks.  Extract doesn't suck, and it has some really funny moments, but it's not quite as good or focused as Office Space. This time Mike Judge reverses the perspective from the put-upon employees in Office Space to the troubles of Jason Bateman, the frustrated owner of a company that makes food flavoring extract. Bateman showing some traces of Michael Bluth is one of the main pleasures of Extract, including his saying the Michael Bluth-ism "We've gotta power through".  Mila Kunis steals every scene she's in as the manipulative con woman lust object of everyone at the extract plant, and a shaggy Ben Affleck has some funny lines as Bateman's drug-pushing Jiminy Crickett. Gene Simmons from KISS, bearing an uncanny resemblance to Unfrozen Caveman Lawyer, appears as an ambulance chasing shyster. Extract is 90 minutes but feels like two hours with its meandering pace and overplotted story, but it's worth it just to try to reason out the logic of why Bateman would rather pay the pool boy to have an affair with his wife than let him do her for free.
Posted by Back of the Head at 4:56 PM