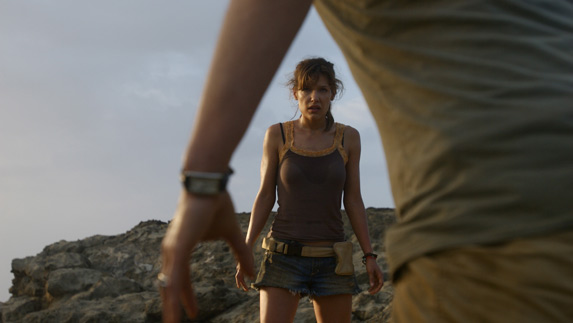 ** SPOILERS **
Five minutes into A Perfect Getaway, I was sure I was gonna hate it. A newlywed couple honeymooning  in Hawaii, played by Milla Jovovich and Steve Zahn, runs afoul of homicidal maniacs and may or may not survive the Worst Honeymoon Ever. I've seen more than my share of shitty movies like this. (Turistas comes to mind.) Certainly the first act, with its bland dialogue and suspect acting by the leads, inspired little confidence. However, hanging in there paid dividends because little by little, A Perfect Getaway got more compelling once it became clear what director David Twohy (Pitch Black) was up to. When news breaks that another honeymooning couple was murdered in Honolulu, Jovovich and Zahn encounter two couples who could conceivably be the killers. The first, a crunchy pair of hostile hitchhikers played by Marley Shelton and Chris Hemsworth, seem like the likely suspects. The next, a redneck couple played by Timothy Olyphant and Kiele Sanchez, are even more suspicious. Olyphant clearly has a ball chewing the scenery as a mysterious Iraq veteran with shady stories of wartime heroics. He and Zahn, a screenwriter, engage in meta-commentary of the movie's plot involving "red herrings" and "a second act plot twist" to "screw with the audience".  When the plot does twist in the second act, Twohy does a neat reverse and provides an extended flashback sequence that actually holds up upon closer inspection. To be sure, the big switcheroo was a reach, but I bought it. Things are not what they seemed at all, and the movie spins off to a suspenseful, action-packed third act that was rather satisfying. Sanchez, who played the much-maligned Nikki in the third season of Lost, benefited from that experience of tromping through Hawaii's jungles. She displays a gritty athleticism that made her action scenes relatively believable. Unlike other films of this genre, A Perfect Getaway is refreshingly not nihilistic and provides solid rooting interest in its hero and heroine. The movie is hardly perfect, but Twohy gets away with quite a bit.
Posted by Back of the Head at 11:31 PM