WRONG SIDE OF TOWN 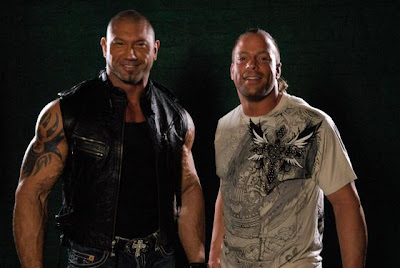 ** SPOILERS **
Not that you'd be inclined to in the first place, but in no way should anyone watch Wrong Side of Town. It's terrible. A terrible, horrible movie. Some of the worst acting, writing, and directing you'll ever sit through. There's nothing here for a normal, civilized person, so move along.

Good, now that polite society is out of the way, we wrestling fans can discuss Wrong Side of Town: It's unbelievably great. Complete with a James Bond-style opening credits sequence, Wrong Side of Town stars Rob Van Dam as an ex-special forces Navy SEAL who's just chillin' in the suburbs minding his own business. Before RVD can get around to smoking a little weed and relaxing, his Steve Urkel-like next door neighbor invites RVD and his wife out for dinner. They end up caught in a completely ludicrous set of circumstances where RVD's wife is almost raped, the brother of a local mob boss is accidentally killed, and a $100,000 bounty is placed on RVD's head.  RVD must then survive constantly being attacked by mercenaries and gang bangers. Luckily, he has some reluctant help from his old war buddy played by Batista. Wrong Side of Town boasts the cinematic talents of Ja Rule, Omarion, and even the wrestler formerly known as Big Daddy V and Viscera (billed in the credits as Mabel). David Bautista (his real name spelled properly) is billed as the top star in the movie according to the DVD cover, but it's almost an hour before he makes an appearance, and even then he's only in four scenes. But what scenes! First time we see Big Dave, he's in the strip club he owns sitting next to a topless chick with enormous breasts.  He spurns RVD's request for aid, then tries to cash in on the $100,000 bounty. Then he suddenly turns babyface and pops a cap right in Ja Rule's head. Throughout the movie, Batista, with his low key line readings and the smug coolness that makes him the number one heel in WWE today, is simply hilarious. Still, the DVD cover is false advertising because this is totally Rob Van Dam's movie. RVD carries this whole fucking show and he's also hilarious. When RVD's teenage daughter is kidnapped, the Animal and the Whole F'n Show team up and clean house on all the bad guys. The best part is when the daughter meets Batista and she decides he's cool. Of course. Batista's totally in there; no doubt in the sequel. By any normal measure, Wrong Side of Town is at best a one star movie, but this is the dream tag team of Batista and RVD we're talking about, so, like RVD's frog splash, it's five stars.
Posted by Back of the Head at 4:21 PM