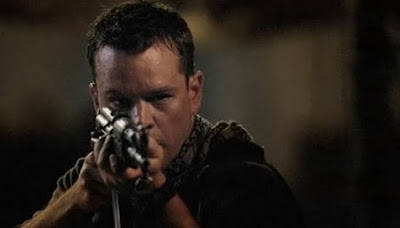 ** SPOILERS **
Set a few weeks after the American occupation of Iraq in 2003 ("MISSION ACCOMPLISHED!") Green Zone may or may not be Based on a True Story (who's to say? It's just a movie. Or is it? Yes), but argues that the United States went to war with Iraq under false pretenses; that the weapons of mass-destruction the US invaded Iraq to locate simply didn't exist. Matt Damon plays a solider who isn't Jason Bourne thrust into an action movie that isn't too unlike the Bourne movies, except not as entertaining or enjoyable. Damon, frustrated that his Army unit assigned to locate the WMDs keeps coming up empty, starts asking questions about where their intel is coming from. Soon, Damon goes "off reservation" and, aided by CIA agent Brendan Gleeson, uncovers the far reaching "truth" behind the Reason We Went to War - involving high ranking Washington official Greg Kinnear, Wall Street Journal reporter Amy Ryan, and one of Saddam Hussein's generals. Damon chases after the Truth with dogged determination while forces both friendly and Iraqi try to stop him.  Director Paul Greengrass employs his considerable skill in telling this story, but the blistering urgency of his shaky cam style of shooting action - employed to perfection in The Bourne Supremacy and The Bourne Ultimatum - isn't well served by the fact that this story isn't particularly urgent. The idea that the United States went to war with Iraq under false pretenses isn't a new one, but Green Zone treats it like a Holy Shit! revelation. Green Zone even hammers home the point with Damon screaming "The reason we go to war is the only thing that matters!" to Kinnear. Perhaps the lesson will be learned for the next time the US commits to a decade-long war. Though well made and earnest, the trouble with Green Zone is that it neither shocks nor awes.
Posted by Back of the Head at 6:45 PM