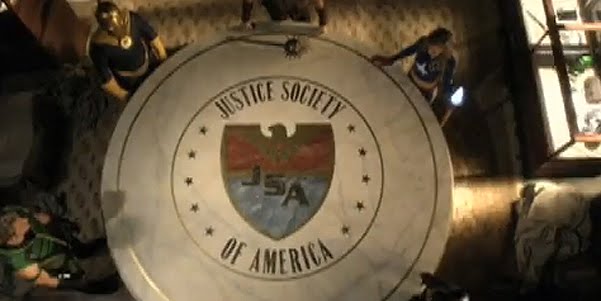 The Justice Society was there in all their four color glory, as much as a TV budget and logistics would allow. The Brownstone, the round table, the props from all the superheroes who were part of the team.

My favorite moment was after Dr. Fate teleported Clark to the Brownstone and Clark pulled the sheets off all of the memorabilia and the Justice Society painting. They panned the painting and showed footage of each character, but when they got to the right side of the painting that had Black Canary, Hourman, and Mr. Terrific, they stopped. Uh, we don't have any footage of them. Also, there's already a Smallville version of Black Canary so... we don't wanna explain... Why don't we just move on?
Clark used his X-ray vision to see the Dr. Fate helmet crazy Kent Nelson kept in the satchel while he was in the Brownstone the first time, but then later during a pow-wow with Chloe, he tells her they're definitely hiding something. Yeah, if only Clark had used his X-ray vision on the rest of the Brownstone. That's our Clark. Always thinkin'.

I liked how the classic comic book method of pairing the heroes off in groups of two happened. Hawkman and Green Arrow, Dr. Fate and Martian Manhunter, Chloe and Stargirl.

The news footage Clark and Chloe watched of the Society members being arrested in the violent, black and white 1970s was very amusing. Too bad the black guy with the big afro they showed for a moment wasn't Black Lightning.

Hawkman was intent on out raspy voicing Christian Bale's Batman. Also, his wings seem to be more decorative than useful because they don't flap or anything to let him fly. Reminded me of the Hawkmen in Flash Gordon (on purpose?) I loved when he broke down Green Arrow's method of not sharing his life with anyone and holding them at a distance by "acting like a jackass."

Dr. Fate was well done. I liked his reading everyone's fates, telling Clark about how when he reveals himself to the world, we'll all "look up in the sky" at his example. His cryptic message to Chloe that she will walk down his path, or something, was interesting. But then he went down like a bitch.

The best Stargirl moment for me was her talk with Chloe about how the Watchtower is technologically sufficient but lacks the qualities of a home that would bring her disparate Justice League together as a family.

J'onn J'onzz is all Martian again! And we got to see him for a brief moment as the big, beetle-browed green gumby in the comics. I liked the costume nod to his comic book look and his line about growing to love cookies.

I wish we got to see the dinner with Chloe, Green Arrow, and Martian Manhunter. I wonder if they had more discussions on how to make their Superfriends more like a family and not just get together when they have Troubalerts.

Of all the superhero props in the Brownstone, the best one by far was the JSA's computer.
Amanda Waller recruited Lois Lane to be part of Checkmate, or at least an informant. Plus we find out Tess Mercer is a Checkmate agent. (I wonder if she ever wore the black and gold costume?) Waller wants all the superheroes to reveal themselves so she can utilize them against the coming apocalypse. Or is that spelled 'Apokalips'?

Really, the only thing I disliked was the actor who played the Icicle. He was just terrible, and that's saying something for Smallville. I liked when Waller said "Welcome to the Suicide Squad!" and shot him in the head. Technically, suicide would be if he took his own life. That's really homicide, what Waller did.
Next week: annataZ ta noC-cimoC.

Ratings Update: http://ausiellofiles.ew.com/​2010/​02/​06/​smallville-​ratings-​absolute-​justice/​
Smallville scores its season best ratings and gave The CW its best Friday night in over a year, according to the article.

Smallville isn't drawing the 4-5 million it used to its heyday, but for a show in its 9th season airing on Friday nights, relatively speaking, it's still Super strong. (Smallville is also one of the most DVR'd shows, averaging a 28% increase when DVR is factored in.)

I can't imagine how Absolute Justice's ratings won't equal a 10th season. The CW should pay Tom Welling whatever he wants to come back; he's been The WB/The CW's biggest star for almost a whole decade now and he continues to deliver.
Posted by Back of the Head at 11:13 PM