Get The F Out 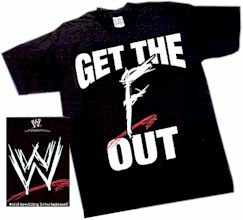 Time Magazine ranked WWE as number 7 on their list of 10 Worst Corporate Name Changes.
Time glibly states: [In 2002] the company changed its name to World Wrestling Entertainment Inc., or WWE. "Our new name puts the emphasis on the E for entertainment, what our company does best," said CEO Linda McMahon in a press release at the time. The comment didn't do much to stamp out persistent rumors that the fights are rigged — but hey, at least she was honest.
It's 2010, but hey, Time Magazine still thinks the pre-determinated nature of sports entertainment that has been public knowledge for a decade and was openly displayed in the Academy Award nominated film The Wrestler are "rumors" that the "fights" are "rigged."

A more credible reason why WWE deserves to be included in the list is that 8 years after the name change, WWE is still referred to more often than not as "the WWF" in idle conversation. Hell, if I'm not talking to a wrestling fan, even I say "the WWF" to avoid a furrowed brow, a look of confusion, and having to launch into an explanation.

In addition, WWE is referred to constantly, even by WWE employees including Vince McMahon on television, as "the WWE", which is incorrect. It's not The World Wrestling Entertainment as it was The World Wrestling Federation. So that's another problem as the unconscious desire to call WWE "the WWF" still exists.

Regardless, Time Magazine decided to focus on "rigged fights" and WWE not being "honest".  That's world-class analysis, Time.

Time Magazine blows.
Posted by Back of the Head at 1:47 PM