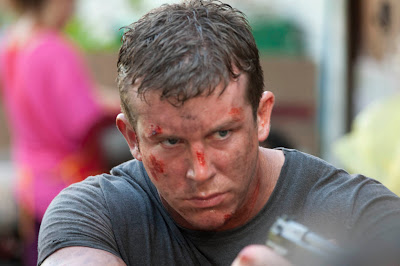 I imagine if you've never seen an action movie before - or any movie before, period - The Marine 2 must be pretty awesome for you.  Taking over the WWE Films "franchise" from John Cena, Ted DiBiase stars as The Marine 2. His name is Joe, but I lost count of how many times he was called "the Marine" in the movie, although to be fair, he was also called "the American" a lot by the Southeast Asian terrorist heavies. The Marine 2 starts off with the Marine 2 on a mission that goes sideways, which leads to an innocent little Asian boy getting killed before his very eyes. This put the Marine 2 in a really lousy mood when his wife invites him to fly to an island resort in Southeast Asia with her. That resort is promptly taken over by the aforementioned Southeast Asian terrorists lead by Temura Morrison (Jango Fett from the Star Wars prequels).  When all of the partygoers and his wife are taken hostage, well, this looks like a job for a Marine. 2.  DiBiase is asked to do precious little acting as the Marine 2 and he's up to the task.  The movie even drops an in-joke about how monosyllabic DiBiase is ("Does he ever talk?")  The Marine 2 also goes out of its way to not name exactly what Southeast Asian countries the action takes place in, and the movie's presentation of international politics was written with the average WWE fans' grasp of such in mind. The Asians in the movie even prefer to speak to each other in broken Engrish than in their native language. Action-wise, The Marine 2 is mainly a riff on Commando and similar movies from the 80's, though DiBiase has a moment where he breaks his wrist to get out of shackles that was both cool and gross.  According to Wikipedia, The Marine 2 was "inspired by true events" (snicker), and Randy Orton was supposed to play the Marine 2 but couldn't because of a broken collarbone. Orton was dishonorably discharged from the Marines in real life before becoming a pro-wrestler, so that would have been hilariously inappropriate.
Posted by Back of the Head at 9:19 PM